In the grand tradition of scruffy, shoe-lace travel, Vang Vieng is where tie-dyed young and old let their braided hair down.
On the bumpy road from Vientiane to Luang Prabang, this town doesn't have a stop sign, much less a traffic light. It's picturesque alright, jagged limestone cliffs and lush greenery with the Nam (river) Song running through it. But it's far from tranquil.
This is Laos' party town, toned down somewhat since the government cracked down on the excess of debauchery, vulgarity and drugs more than a decade ago. But it's still a place which survives mainly on foreigners' frivolity.
You can go tubing, rock climbing, zip-lining and caving - all of which I'd rather pay not to do, at the moment. But for those seeking organized adventure, the promise abounds, as do the sprains and broken limbs reported at the ramshackle local hospital. In town, you can find the more sedate types sprawled out on soiled cushions at open-air restaurants, swigging Beerlao or slurping noodles while hypnotized on reruns of Friends. This is no joke: every eatery with a mounted flat-screen TV (many of them) ran episodes of that ridiculous American sitcom, which is more curious in that most latter-day beatniks in Vang Vieng were Germans, Koreans or Aussies. 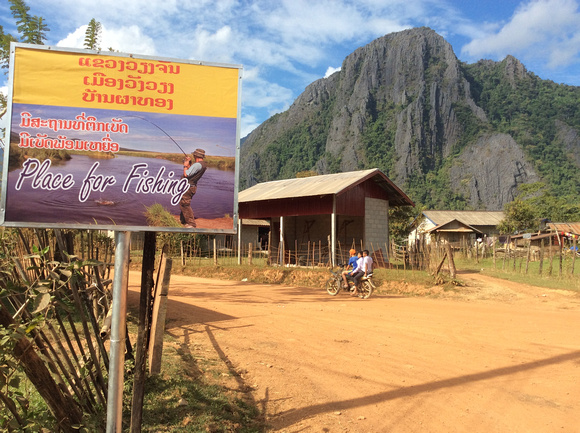 Once again, I sit back and chuckle at the notion that my friends back home are imagining I'm bathing within the womb of exoticism. It happens, yes, from time to time. But travel in our times is mostly a mundane journey of dubious busses, lumpy beds and reflective solitude. All worth it, it is hoped, for the occasional jolt of wonderment.
Renting a motorbike is great to get out of the frenzy and enjoy the outskirts. No fuss, 5 bucks a day. Laos is so lax, you'd never be permitted to do that in Cambodia or Vietnam. Then again, in Vietnam, you'd be a fool to even try. In mid afternoon, I came across une ecole elementaire that was letting out and all the kids and teachers circled a flagpole besides a giant tamarind tree to sing the national anthem and lower the banner. I found a bona-fide 10-lane bowling center tucked in the jungle - I had to go inside to believe my eyes and there they were: 10 lanes and a shimmering parquet. (oh, those Chinese tourists!).  I saw a bunch of incongruous tourism panels that made you wonder if you were in Idaho, perhaps (iPad shot here).
But what captivated my camera most in Vang Vieng was the "art" of bicycling while holding an umbrella." (No pics just yet, all still in the camera). Seemingly, everyone on two wheels is perfectly adept in shielding themselves from the hot sun with one hand, and negotiating the rubble roads with the other. It was a gorgeous image I couldn't get if I was rafting down the muddy rapids.

~ dedicated to my friend Marvin, in my thoughts on the road - RIP