The Durango Diner is a throwback. Long Formica counter, a dozen swivel stools, a wall scattered with picture frames, lots of stainless steel and just enough room for patrons and staff to squeeze by each other on either side. A couple of tables up front by the window, flanked by photos of cowboy John Wayne and Cheyenne Indians. A cozy place, with old-style friendliness.
I had first visited Durango, a small town high in the southwest mountains of Colorado, in 1983 - on my first cross-country drive to discover the world. I remembered it as charming, rugged and remote. It may still be this way 34 years later, but it has also become chic, hip and gentrified.  Bright white mini-lights wrap around the tree trunks on Main Street; exotic restaurants cater to an affluent tourist crowd; the landmark Strater Hotel is remodeled; the old Woolworth is replaced by trendy shops. 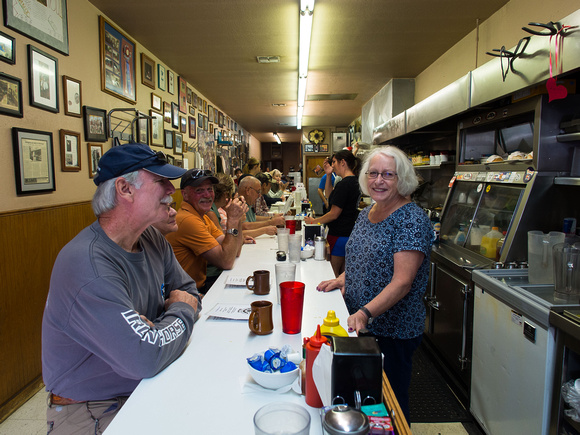 No stopping progress, I reckoned, sidling up to the counter for breakfast.
I had loaded a picture I took of Main Street in '83 on my mobile phone, which I ached to show to someone.
“Do you remember this?” I asked the silver-haired lady at the cash register.
“Oh, my, I used to have lunch at the Woolworth cafeteria,” she said, startled and smiling by the memory.
A haze of nostalgia washed over her face.
Her name was Uta, and she’s lived in Durango most of her life, after marrying an American GI she met in her hometown of Stuttgart, then-West Germany, in 1974.
“Ssscchhtutgaahdd,” she pronounced it, her voice soft and lilting with just a hint of old accent.
“Oh, it was against my father’s wishes, but I went off anyway!” she said, trailing off with that little laugh of reminiscence. “But the marriage only lasted 5 years – one day, he just never came home.”
Her father never visited the United States, but she has never regretted her move.
“I didn’t want to go back. I stayed, and got remarried to a geologist who had studied at the University of New Mexico.”
They lived in Albuquerque for a few years until her husband retired, then moved back to Durango.
I was touched by her gentleness, how she shared her own intimate story in such a boisterous setting.
I wasn’t pressing as much as fascinated by how an entire world unravels at such unexpected times.
In that same spirit, I told her a little of what I was up to, my road trip across America to Quebec, and now stopping here on purpose in my drive back to Las Vegas.
“There’s a Las Vegas in New Mexico too,” she said. Yes, I said, a lovely town, I’d been there, not far from Taos. “And there’s another town called Miami nearby,” I chuckled.
“And a Cleveland too,” she chimed in, enjoying the banter. “I knew a trumpeter with the New York Philharmonic who was from there … we went to his burial a while ago.”
Oh, I thought: a conversation cooler. But not at all.
“Imagine,” she continued, lost in reverie, “having so much success in life coming form a small town like that!”
I liked this woman. I wondered if she even realized the aptness of her words.
“It doesn’t matter where you’re from,” I said, “what matters is where you live your life.” 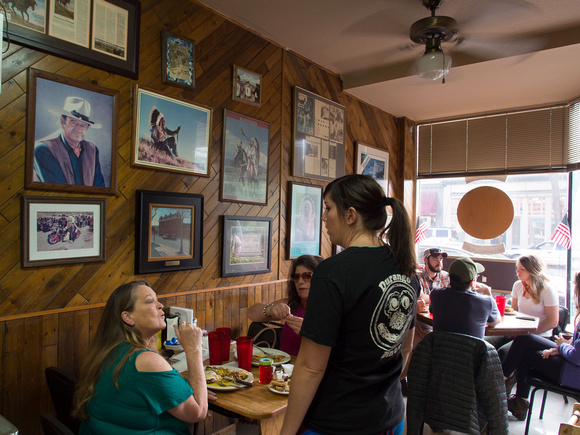 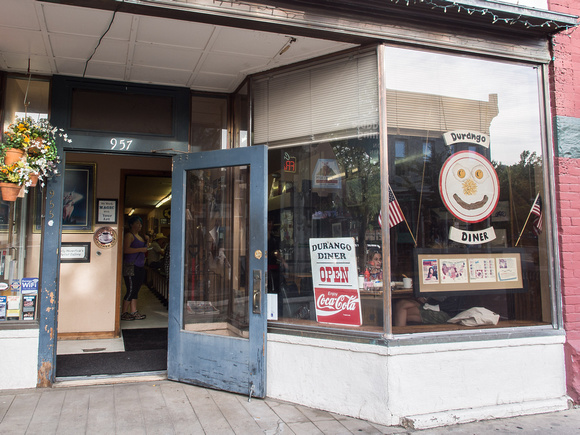 Gisele Richter(non-registered)
What a brilliant storyteller you are. I happen to know UTA.
She is a close friend of mine. I live near Stuttgart too and have also
seen a bit of this world. Thank you so much for letting me share in
a nice story about a diner and a friendly lady in Durango .Loved it.
I wish you all the best.Keep up your blog.
G.