There are date farms in Tacopah, just inside the California border, that rival any yield coming from Iraq. I picked up a bag at a place called China Ranch, a secluded oasis down a dirt road cut through soft rock. Legend says it’s so named for a fella named Ah Foo, who first settled in the area in the late 1800s to grow fruits and vegetables, and provide prospectors a respite along the Old Spanish Trail... until a whitey ran him off his own land around 1900. The succulent dates simply melted in my mouth as I headed toward the entrance of Death Valley, 50 miles north. Splendid and enormous it is, but Death Valley never really took my breath away. Too jaded by living next to Red Rock Canyon, perhaps. Lots of motor homes in RV campgrounds, more like parking lots really, orderly complacence amid random wilderness. 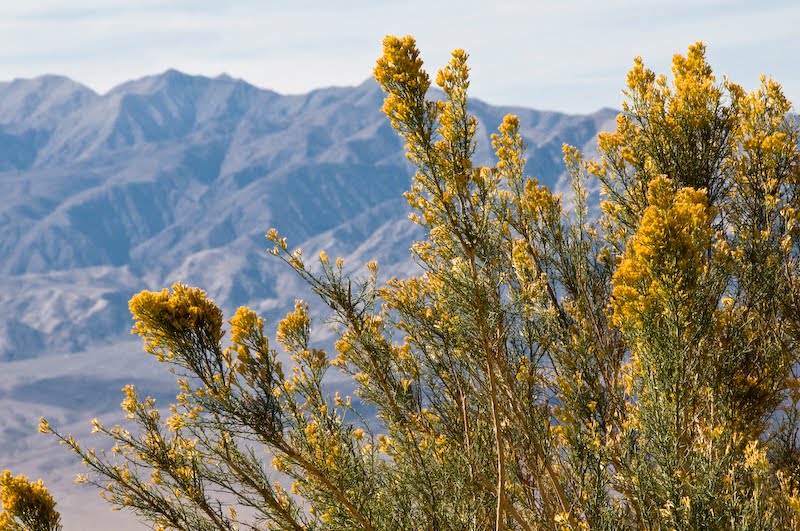 when, suddenly, the heavens shook and nearly yanked me out of my socks. The bucolic tranquility was shattered by a fighter jet shearing the blue sky, a terrifying visceral shaking of my innards. Sonic boom is an acquired taste. Instinctively, I pointed my camera up and shot without motor pause...   Wouldn’t you know it? The nation’s spiritual oasis is also the military’s training grounds. Lovely. The jet flew over another time, and again, I shot 10 pics a second. And then, I began to wonder... was this prudent? Was it prohibited to photograph a military exercise, me, alone with my bright red car in the middle of the dead valley... I kept on the lookout for black sedans and suited men in dark sunglasses to descend upon me. I could be eliminated and no one would be the wiser. Thankfully, I was near the western exit of the park, and conspiracy theories be damned, it was good to be heading to small towns up route 395. In Lone Pine, a hamlet flanked by Mt Whitney and the Sierra Nevada range, clouds of dust blew so hard it looked like fog. A storm was rumbling in, I was told by the cowpokes at the Film Museum, where I stopped to gawk at old western posters and memorabilia. Hundreds of movies have been shot in this vicinity, from Tom Mix to John Wayne to Gladiator. In Bishop, the big town of the region, I found a motel run by an Indian family (think Ghandi, not Sitting Bull), with a descent shower and working TV. It was grand. The town was more quaint than smart.

The backdrop of mountains gave it a regal air, but in truth Bishop is rather drab and derelict, as though the failed prospectors, progeny of the legendary 49ers, never wholly dusted themselves off from the end of the gold rush. Main street features the usual thrift shops, antique stores and coffee houses. Up the road sits the Palace Casino, run by Indians (think eagle feathers, not lamb korma). Stuffy and smoky, I had a look-see and split. Wasn’t going to waste my time toying with lady luck away from home.   Had dinner at a Mexican joint called Amigos, a local favorite with nary an empty table. Good sign. The nacho chips came with a home made salsa that resembled Campbell’s minestrone soup, peas and onions and watery. Bad sign. My Veggie Burrito was cold and tasted like boiled cardboard. I ate half and packed the rest for bear bait. Had better luck at Jack’s (since 1946) for breakfast on day 3. My waitress was the quintessential Alice, calling me Kiddo at every turn. “More coffee, Kiddo?” “Too much butter on your bread, Kiddo?” “Have a good day, Kiddo!” Drove back east skirting the top of Death Valley, through the frosty aftermath of a heavy snowfall in the upper elevations. Hardy Joshua Trees stood stoic in the fresh white wintry blanket. Ice crunched beneath my wheels, the road as treacherous as it was scenic. Montreal driving had taught me well, but I was weary of other desert interlopers. 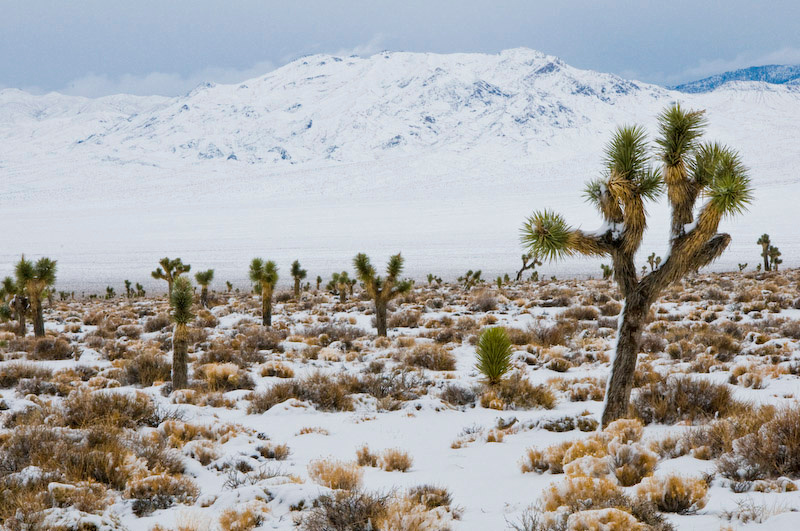 Soon enough came the intersection of highway 95, the road south through the town of Beatty, NV. Eight years living in Las Vegas, I’d always heard of Beatty, but never been. Finally saw why. Beatty is not so much a town as a collection of trailer homes, cinderblock dwellings, junkyard lots and a ramshackle casino sitting at another entrance to Death Valley. I gassed up and sped on, brooding skies and a cheery heart laying before me as I headed home.   a. Nov 3, 2011. ~ visit my photographic gallery at http://www.armandthomas.com/ ~