As the World Turns

< Last of the blogging while tripping in Vietnam and Cambodia >

As is customary at the end of a trip to an impoverished part of the world, my thoughts turn to my parents, and my eternal gratitude for having emigrated from Egypt in 1966. My parents’ risky move gave us a chance for a better life, for prosperity, education and human rights.

I adored visiting Vietnam and Cambodia, exotic and intoxicating nations, historical and cultural landmarks, but also distressed and corrupt, nations struggling to recover from tragic pasts. And I am once again reminded of my own good fortunes, and how not to take them for granted. Because there, for the love of Buddha, could have gone I.

Despite threads of melancholy in my writings, it was a trip filled with wonder, both sublime and ridiculous. How these people have such easy smiles defies their meager means. How there aren’t a thousand crashes at each of Saigon’s busy intersections defies logic. 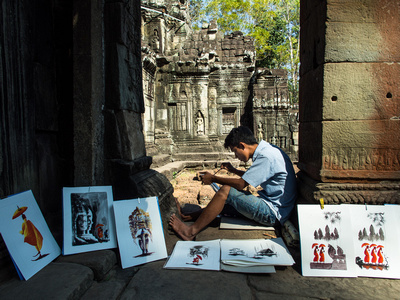 So many elusive memories over three short weeks.

I chatted with a group of young monks inside Buddha school in Phnom Penh for a half hour – just walked in off the street and climbed a set of stairs to a classroom…. I had a haircut in Siem Reap in one of several shops soon to be added to my Barbers photo gallery… I had 50-cent dinners and 4-dollar cups of coffee, obviously not at the same place. I hung out with a young painter in Wat Prohm (near Angkor) and bought one his watercolor artwork… I treated myself to one cheap massage, but couldn't fathom getting a Happy Ending from a pitiable young girl… I walked in the footsteps of my all-time hero, English writer Graham Greene, whose classic A Quiet American was set partly at 151 rue Catinat (now called Dong Koi) in Saigon (now Ho Chi Minh City). That very arcade now features art shops and a tasteful café called L’Usine… I handed out small bills like tissues at a funeral, and gave kids hologram 3-D stickers of African animals bought at the 99-cent store in Vegas… I got my legs splashed by fish so fresh at the locals market, they were still writhing in a shallow basin of water… I rode passenger at the back of a motorbike "taxi" with my heavy backpack through the dizzying Saigon traffic and for all the gold in the world, I wish I had a GoPro camera on my useless plastic helmet - terrifying and terrific all at once… I found Wifi everywhere and veggie offerings hardly anywhere, thus packing on an 10 extra pounds through a diet of rice, noodles, pasta, crackers and bread… Too Fast Too Furious blared on the TV monitor at the front of the bus as we bounced along a rural Cambodian road, swerving to avoid cattle, deep ruts and sputtering tractors from the 1950s… I bumped hard into an ancient column walking dazedly around the Angkor Wat ruins, and exclaimed "Now, who put that there?!" (but none of the Chinese tourists found this hilarious)… I bought small inexpensive souvenirs galore, not so much from the need to have as from the goal to give… Why then, at times, did I haggle over a huge amount of 15,000 dong when in the end, it amounted to 75 cents?... I was bedazzled by the sweetest 7-year-old in Cambodia who sold postcards and could recite 1 to 10 in ten languages – switched the camera into video mode in time to capture the last 5… On a Saigon city bus (yes, I hopped on those to mingle with locals) I sat next to an old man, maybe 80, who's eyesight was failing, but spirit still robust. He railed to me, in Vietnamese, with relentless passion. "He complains about the communists," the girl behind us explained, in French. She had just come back from studies in Paris and noticed my Cirque t-shirt. Got that on video too… I loved my new gear – the tidy Olympus OMD5, the Lowe Pro messenger bag and the mini iPad… all small and subdued and exceptional travel companions. 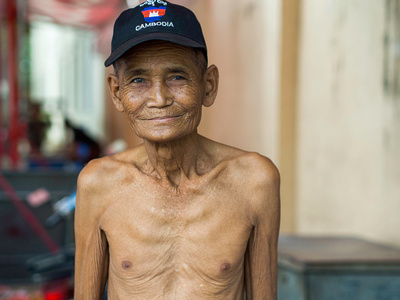 A delightful trip, yes - but one of conflicting emotions. One moment supremely awed, the next wholly disgusted. I couldn’t get the Cambodian tragedy of Pol Pot out of my head. Two million people wiped out, the quarter of the population. Just 40 some year ago. “My uncle he die from no eat,” the painter at Wat Prohm told me, a line that I wrote in dread and earnest. Vietnam too can have wrenching poverty, but there’s entrenched desperation in the Cambodia. And a more vile government, not coincidentally. Beggars, amputees, child labor, sex tourism, relentless flogging, peddling, pleading… Hardship comes at you in many ways, and if the heart doesn’t break it does not beat. That's the price of traveling in the real world. We go see not only for pleasure, but also to know, to become aware. To be of the world. To appreciate what matters.

Soon, I’ll be back home, mending my garden, watching hockey on television, polishing my motorcycle, complaining about my job, living the privileged life and trying not to feel guilty about all the disparity.