January 21, 2014  •  1 Comment
< Tripping and blogging from Vietnam and Cambodia >
Travel, if you're lucky, is half pleasure and half work. Because the pleasure is so intoxicating, we keep hitting the road like junkies for a fix. But you're constantly dealing, forever on guard - is the passport safe? Is the food clean? When's the next bus? Where's tomorrow's bed? Are the camera batteries recharged? Carry a pen knife and a small tube of crazy glue. Watch out for harassing touts, pickpockets and bag snatchers on motorbikes (I had my iPad nearly ripped out of my hands the other day); don't twist your ankle, always keep small bills handy and never stray too far afield if you have the runs.
The basics.
It develops as second nature, and it's all worth it, every bit. 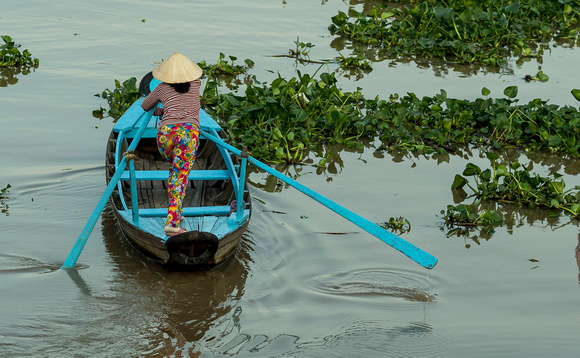 But, yes, it does wear you down, and my stamina isn't what it used to be.  The trip rounding it's final bend, and having caught a cold, the temptation to zip back to Saigon fro Phnom Penh was great.
So glad I resisted, and took a motor boat down to the Vietnamese border town of Chau Doc.
With a population of 150,000, it's small enough to be remote and offer the quintessential Mekong Delta experience, while big enough to have a place to stay like the Murray Guesthouse, one of those pleasures mentioned before.
Run by a worldly Australian man and his Vietnamese wife, it was one of those unexpected rewards on the the unplanned itinerary. Spotless, friendly, helpful. Plus, they provided good bicycles which I used over my 2 days, scurrying around the loud and colorful markets, finding hidden alleys to the water's edge where women in straw cone hats rowed by standing up, and taking the ferry across the tributary to explore the slower and somewhat more pastoral (ie: poorer) outlying communities. Lots of shanty homes and stilt houses perched over the waters. And, it came as quite a shock, a dozen Mosques squirting the area of Chau Phong, most notably one named Mubarak. When the muezzins blared their calls for prayers as students in their flowing silks pedaled by, I stopped to wonder where I was.
Buddhists, Taoists, Moslems and Christians seem to coexist fairly well around communist Vietnam, particularly in the south.  Go figure.
(Jan 20)
Video Chau Doc Market - Mekong Delta