Everyone, any place, all the time in Seoul seems to be clutching a mobile phone. It’s not just common. It’s spectacularly pandemic. And when not transfixed by the lighted screens or tapping away at the glass, they’re

carrying the device like precious treasure, elbow crooked and hand for holster, as if plugged into a human battery pack, a life-support appliance, an extension of their very being in this futuristic world.

Trend-happy Koreans perhaps feel uncomfortable, untethered, without their mobiles - out of step, out of order. Naked.

It makes for a droll and twisted conundrum, like a Steven Wright joke (remember him? “Why do we drive on parkways and park on driveways…”) – Why are folks in the best-wired city in the entire world so virtually disconnected?

The answer flutters right there on the South Korean flag (and no, that’s not the Pepsi Cola logo, you wags!)

Yin and Yang – the duality of life, the opposites that compliment, the light that gives meaning to darkness, the give and take, the sweet and sour, Abbott and Costello… ok, you get the point.

Korea, as much as anywhere else on the globe, is a culture of paradox, of profound contradictions. It’s a society at the confluence of tradition and modernity, of ancient temples and imposing high-rises, of booming prosperity and a dreadful suicide rate… And, of unrivaled broadband and a zombie-like citizenry that lives within cyber-bubbles. 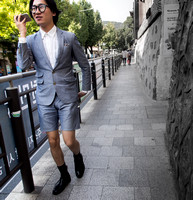 There’s a price to pay for high technology beyond the monthly fees.

Crossing the street, riding a motorbike, behind the store counter, out for dinner, inside the big top … the addiction is unremitting.

And nowhere is the mobile phonemania, I mean phenomena, more prevalent than in the sublime Seoul subway. No, I haven’t seen every metro system in the world, but good luck finding one that equals Seoul’s, in its ultra efficiency, cleanliness, citywide coverage, and meticulous design.

It must also be the quietest, most passive and orderly mass transit system anywhere, not because of soft rubber tires or stern policing, but because everyone, or just about, is enrapt, consumed, hypnotized by their very, very smart phones.

Chris Lashua(non-registered)
was that a newspaper I saw at the end??!!!
Marjon(non-registered)
Cool text, cool video.....remember Japan? Extremely similar....except that there, you would not have been allowed to do openly film on the subway.....in japan the mobile phone have a built in photo shutter that you cannot turn off, for the sake of 'dirty' minded people not being able to take photos of young girls in the subway.
Which reminds me that in Japan during rush hour....the very orderly mass of the population is divided between men and women for certain cars of the subway.
So the sexes can chose to be Among themselves, during the busiest times of the day.....quite a concept in this modern world and what is even more astounding is the respect towards these measures.
Fascinating.....we can learn a lot from it....
No comments posted.
Loading...
Subscribe
RSS
Recent Posts
Coast-to-Coast in Northern England 2017: A Very Montreal Summer Durango Diner free-flowing America Phoenix on the fly Christchurch Mending Water Dragon, No Worries Laos - land of enchanting sorrow Vang Vieng & Friends Laotian sun
Keywords
Travel Photography blography street Vietnam blog poverty Seoul Cambodia Saigon
Archive
January February March April May June July August September October November December
© ARMAND THOMAS MyEyePhoto
Powered by ZENFOLIO User Agreement
Cancel
Continue