How odd to be in this futuristic, gleaming city of fashion, skyscrapers and international pop stars, and to know that just over there, beyond a border 35 miles away from Seoul, the kinfolk are oppressed, malnourished and pretending to adore the haircut of their dictator, that nice Mr. 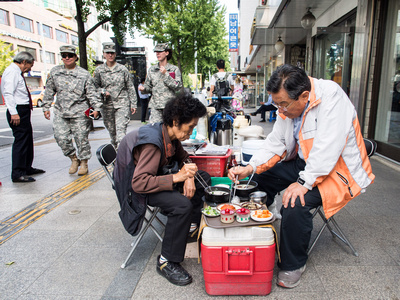 In fact, it's only the Demilitarized Zone that's so close, a large swath of land so vacant of inhabitants that wildlife has flourished in the area. The infamous DMZ, the most fortified checkpoint in the world, where rival soldiers stare each other down with pointed rifles, is a tourist hotspot, where visitors (from the South side of course) can pay $40 to feel the tension and absorb the absurdity.

But it's no joke, sadly. The Koreas declared an armistice 62 years ago, so technically the war never ended. Hostility is as real as the difference of ideology – and while one side regales itself in the lap of luxury, the Hermit Kingdom is the embodiment of paranoia and hardship.

What did Frankie Valli croon? “So close, so close and yet so faa-arr…”

Odd. Very odd. And it’s not as if we’re contrasting neighbors like Mexico and America, or China and India. Here, we have shared lineage, ancestral legacies, brothers and sisters, family. They are one, save for the politics. Like Germans once were after WWII, only weirder.

Yet, in Seoul’s everyday life, the situation is practically invisible. There are occasional demonstrations, anti-communist rallies and spikes of protests that hit the news - but on the whole, the divide is not topical. It doesn’t command attention or interrupt the idyll. Like a lousy breakup you’d rather forget. It’s too painful to dwell upon, perhaps. At least, that how it looks like to us strangers. 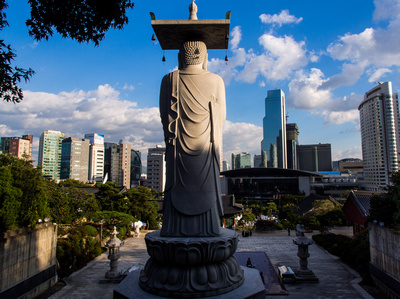 It’s always hard to tell. Koreans can be inscrutable. Theirs is a bowing culture, full of ceremony and decorum. They are demure, reserved and regimented. Posh and proper Seoul is orderly, people conform, abide by the rules, adhere to programmed efficiency that breeds success. That same sort of indoctrination, propaganda - call it brainwashing - is at work in the North, where fear and tyranny make the populace appear in step with its leadership, united in its cause, disciplined and resolute.

The pandemonium fans display at a baseball game in the South eerily resembles the hysterical cheering North Koreans lavish on their Supreme Leader. It’s manic yet calculated, a way of life, of fitting in, of compliance, of self-preservation.

You can rip the nation in two, but you can’t split the DNA.