Any nation that loves baseball so much can’t be all that bad. Ok, the passion may be as much for the spectacle in the stands as the sport on the field, but it’s still the grand ol’ game.

A colleague of mine on Quidam was requested to cover his leg ink if he wanted to work out at the hotel gymnasium. The radical!

The last time anyone consumed drugs in South Korea was Ben Johnson in the 88 Olympics – or so it seems. I never appreciated what a scandal that truly was until now.

Seoul is literally safe and figuratively sober – even the Buddhist monks here dress in grey. But getting drunk on Soju and staggering out of bars is as much a rite of hardworking salarymen as it is for their Tokyo sake-swilling counterparts. The most prevalent vice, if it can be called that, is an unadulterated addiction to caffeine. Coffee shops abound nearly as much as Korean BBQ joints, and both are flooded with patronage day and night. It’s as if nobody cooks at home.

Whether due to diet, genes or stress, fat people are as rare as vegetarians. I, for one, am both - no thanks to the scarcity of options at restaurants. A veggie meal here can include chicken, or beef broth, and a high likelihood of being infused with fish sauce. So, bring on the bread, cheese, pizza, and pasta … and pounds.

“Gaegogi” is not as common today as it once was, but still part of the menu in many traditional restaurants and local customs. In the past few years, vocal groups have decried the practice, especially for its brutality and inhumane butchering methods. Legend has it that the more the animal suffers, the more invigorating the medicinal properties of its meat. 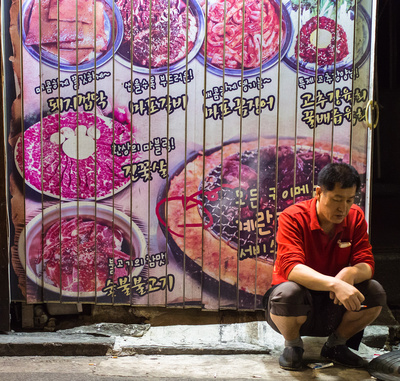 Some 2 million dogs are slaughtered for meat each year (and about 100,000 cats, why not?).  Most are bred in farms, but some start off as pets before they're turned into stew. I’ll spare you more details.

On my last days in Seoul, I found this so appalling and abhorrent that I wanted to go out into the neat and tidy streets and kick people’s shins, piss on their sublime subways, throw mud on their cashmere coats and run a key across their swanky Hyundais.

But my indignity for Fido turned into cold reflection – every year in America, 35 million cows, 110 million pigs, 9 billion chickens are turned into food.

Koreans, some of them anyway, don’t really see the difference between man's best friend and other animals. At least not on the dinner plate.

Please use the link below for my new Seoul photo collection, and click the "Slideshow" button to add music